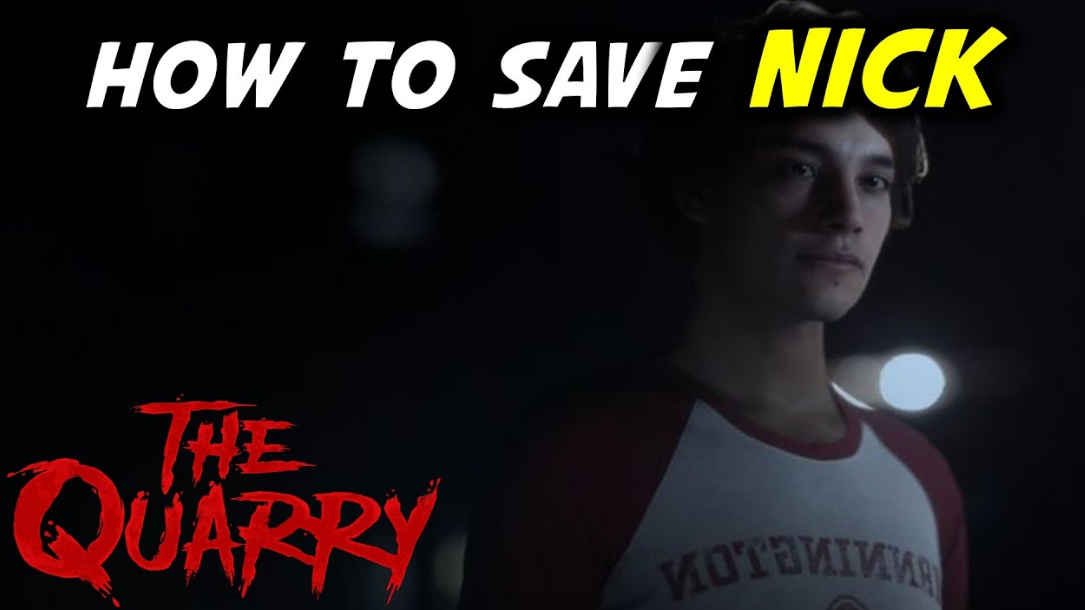 Are you struggling to figure out how to rescue Nick from The Quarry? Because Nick was bitten by the monster following his passionate conversation with Abi in the woods, it’s likely that you’ve found your way here because the prognosis for Nick’s survival has been looking very bad since the game’s first few hours. In this walkthrough, we will walk you through all of the choices you’ll need to make in order to keep Nick alive until the very end of The Quarry and ensure that you get the greatest possible ending.

You may believe that it is impossible to save Nick after he is bitten by the monster in Chapter 3, but the most essential thing to remember is that there is no way to prevent Nick from being bitten, and as a result, there must be a means to keep him alive after the encounter. So let’s get started:

Read Also: How to Save Jacob In The Quarry

When this occurs, it is imperative that you select “Help Nick” as Abi when presented with the option to either assist him or flee the scene. This will assist prevent Nick’s injuries from being as severe as they otherwise could have been.

After Nick has been bitten by the werewolf and the player is given control of Abigail, the player should select the Help Nick option. Abigail will be successful in driving away the monster, and if she avoids being caught and uses the Hold Breath option successfully, she won’t have to worry about being bitten. In the future, Ryan will continue his quest for Nick while the latter is being taken away by the hunters. Take aim and fire the shotgun above Ryan; this will cause the hunter to flee the scene.

Nick can be responsible for one of the most tragic endings for characters in The Quarry if they pass away in Chapter 6. Nick will toss Abigail across the room as soon as the player regains control of her and she is returned to him after being controlled by the player. Abigail is in a position to shoot Nick, and she must take advantage of this opportunity. Nick will not perish as a result of this, but Abigail will lose her head if Nick is not shot.

When you get to Chapter 8, make it a point to tell Ryan to stop Laura from shooting the werewolf in the cage because it is actually Nick.

In Chapter 10, you must put an end to the life of the werewolf named Caleb in order to save Nick from the curse.

Can you kill Nick in The Quarry?

Nick is one of the playable characters in The Quarry who has the potential to either be saved or killed, with the former option being the more difficult of the two. It’s possible that Nick will be the character who has the most trouble staying alive throughout The Quarry, given how much bad luck appears to follow him and the other characters.

Is there a way to not get Nick infected in The Quarry?

Everyone in the Quarry Who Constantly Contracts the Disease

In Chapter 3, Nick will continuously be assaulted by Silas, who will also bite him. In “The Quarry,” players have the option of either saving or killing Nick. However, if Nick has been bitten by Silas, then the only way for him to be cured is if Laura manages to kill Silas at the end of the game.

Does Nick become a werewolf in The Quarry?

In the third chapter, Nick and Abigail will run into each other in the forest. A werewolf will attack them while they are together, but it will concentrate its attention on Nick. Nick contracts the infection as a direct result of being bitten by the creature. Because of this, he will undergo the transition into a werewolf.

Should you apply pressure to nick The Quarry?

If you decide to put pressure on Nick, it won’t accomplish anything more than cause him pain. After that, we’ll be exposed to sounds coming from the woods, followed by Ryan grabbing the shotgun. An interruption will occur at this point, as Ryan will be able to cry out to the noises and warn them that he is armed with a shotgun. You can yell all you want because this decision won’t have any bearing on the outcome.

What is the best ending of The Quarry?