Mafia: Definitive Edition is an upcoming action and adventure video game created by Hangar 13. It will be published by 2K Games. It is a complete remake of the 2002 video game Mafia but with better graphics. It was announced in May 2020. It is scheduled for release on 25th September, 2020 for Microsoft Windows, PlayStation 4 and Xbox One. This game is set within a redesigned version of the fictional city of Lost Heaven. Lost Heaven is based on Chicago, in the 1930s, and follows the rise and fall of taxi driver that turned to mobster Tommy Angelo within the Salieri crime family.  A trailer of it was just released a while back and it looked amazing.  More Mafia: Definitive Edition trailers are expected over the coming weeks before its launch. Future videos will look at other improved assets such as the missions, soundtrack, and the overhauled shooting and driving mechanics.

The soundtrack in English for the game was recorded with a different cast. It was with the Italian-Australian actor Andrew Bongiorno lending his voice, motion capture performance to Tommy Angelo. Hangar 13 president Haden Blackman stated “since our cinematics rely heavily on motion capture data, it was essential that we have both voice and physical performances”. And they wanted to be assured that the actors not only looked the part but could also perform well on motion capture and voice-over booths. The Czech dub has most of the surviving cast from the 2002 game reprise their roles for the remake, like Marek Vašut who returned to voice Tommy. 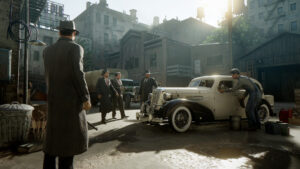 Related Topics:GamingMafiaMafia: Definitive
Up Next