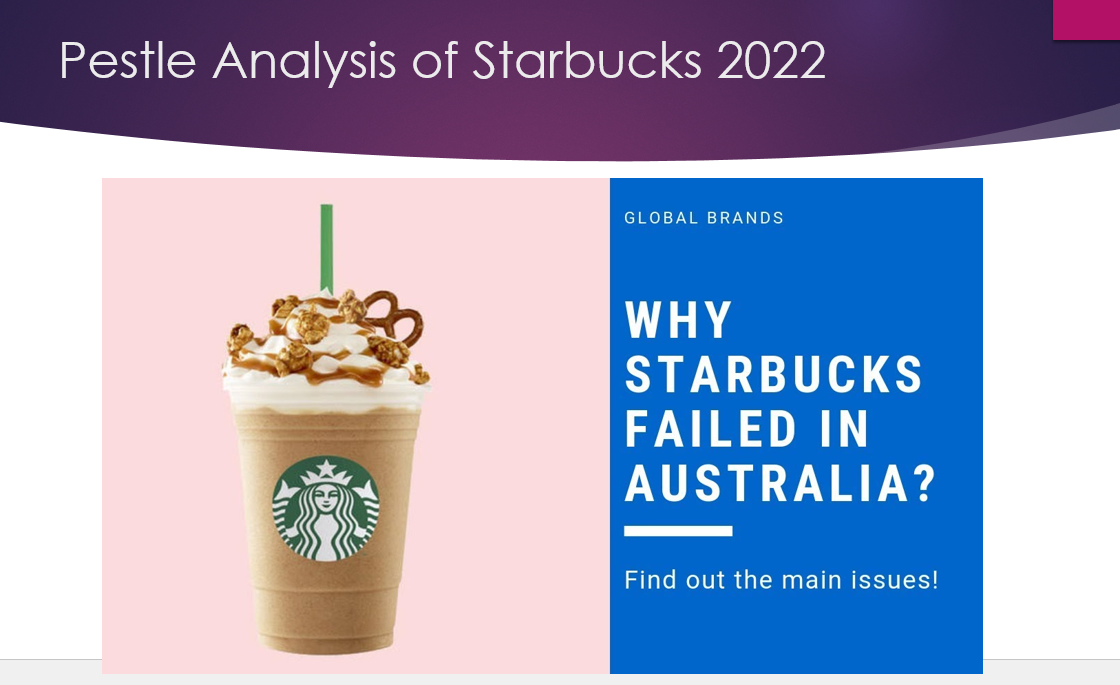 In this article, we will carry out a PESTEL analysis of Starbucks in Australia. You can also read here the latest analysis technique cage frame work of Nike. Before we continue the pestel analysis lets look why starbucks failed in australia?

Note: You can contact us at admin@irnpost.com if you want us to help you with your any assignment writing.

Why starbucks failed in australia

There are a few reasons cited for why Starbucks failed in Australia. The first reason is that the coffee chain overestimated the Australian market. When it first opened in 2000, Starbucks thought that Australians would be willing to pay more for coffee than they actually were. This meant that Starbucks’ prices were too high for most Australians, who are used to cheaper coffee.

Another reason for Starbucks’ failure in Australia is that the company did not do enough research on the local market. For example, Starbucks did not realize how important it was to have a drive-through option in Australia. This is because most Australians live in suburban areas where driving is the primary form of transportation. Without a drive-through option, many potential customers were not able to get their coffee fix.

In addition, Starbucks’ stores in Australia were not designed to attract the local market. The stores were too small and did not offer the same range of products as other coffee chains. This made it difficult for Australians to find what they wanted at Starbucks.

Lastly, Starbucks’ marketing strategy in Australia was flawed. The company relied too heavily on advertising and did not focus enough on word-of-mouth marketing. This meant that many Australians were not aware of the Starbucks brand.

Despite these reasons, it is important to note that Starbucks is still a successful company overall. In fact, the company has been growing steadily in recent years and now has over 28,000 stores in 77 countries. While Australia may have been a failed market for Starbucks, the company has shown that it can be successful in other parts of the world.

Now we will have a closer look on All Factors of Pestle Analysis.

Political factors: The political environment in Australia is relatively stable. The country has a strong economy and is attractive to foreign investors. However, the recent global economic downturn has affected Australia’s economy and this might have an indirect impact on Starbucks’ business in the country.

Economic factors: Australia is a developed economy and is one of the world’s top 10 countries in terms of GDP per capita. The country has a high level of economic freedom and its economic indicators are strong. However, the recent global economic downturn has impacted Australia’s economy and this might have an indirect impact on Starbucks’ business in the country.

Australia has a strong and stable economy that is resilient to global economic shocks. The country has a AAA credit rating from all three major rating agencies, and is one of the few developed countries to have avoided a recession in the wake of the global financial crisis.

Australia’s economic growth has been underpinned by a number of factors, including a strong education system, a skilled workforce, a stable political environment, and a commitment to free trade and open markets.

The country’s economic performance is also bolstered by its abundant natural resources, which have helped fuel Australia’s export-driven economy. Australia is a major exporter of coal, iron ore, copper, gold, and other minerals and resources.

Despite its strong economic fundamentals, Australia faces some challenges in the years ahead. These include an aging population, a high level of household debt, and slowing productivity growth. Nevertheless, Australia is well-positioned to weather these challenges and continue growing in the years to come.

Social factors: The social environment in Australia is diverse. The country has a high level of social cohesion and its citizens are generally well-educated and have a high standard of living. However, there is a growing trend of obesity in Australia and this might have an indirect impact on Starbucks’ business in the country.

There are many social factors that contribute to the unique character of Australia. The country has a diverse population, with people from all over the world calling Australia home. This diversity is reflected in the food, culture and lifestyle of the country.

Australia is also a very egalitarian society, with a strong focus on mateship and equality. This is evidenced by the fact that Australia has one of the lowest levels of income inequality in the developed world.

Another social factor that contributes to Australia’s unique character is the fact that it is a very individualistic society. Australians tend to be quite independent and self-reliant, and this is reflected in the way that they live their lives.

Finally, Australia is a very relaxed and laid-back country. This is evident in the way that Australians dress, speak and interact with each other. It is also reflected in the country’s leisure activities, which tend to be quite informal and relaxed.

Technological factors: The technological environment in Australia is highly developed. The country has a strong infrastructure and its citizens have high levels of access to technology. This provides a good opportunity for Starbucks to expand its business in the country.

These are 10 additional technological factors of australia

Legal factors: The legal environment in Australia is favourable to businesses. The country has a well-developed legal system and businesses can operate in a relatively stable regulatory environment. However, there are some restrictions on foreign investment in Australia and this might have an indirect impact on Starbucks’ business in the country.

There are a number of legal factors that businesses operating in Australia need to be aware of. These include:

The Australian Consumer Law: This law provides consumers with certain protections when they purchase goods and services. Businesses must ensure that they comply with the relevant provisions of this law or they may face significant penalties.

The Fair Work Act 2009: This Act sets out the minimum entitlements for employees in Australia. Businesses must ensure that they comply with the relevant provisions of this Act or they may face significant penalties.

The Competition and Consumer Act 2010: This Act contains a number of provisions that are designed to promote competition and protect consumers. Businesses must ensure that they comply with the relevant provisions of this Act or they may face significant penalties.

The Privacy Act 1988: This Act regulates the way in which personal information is collected, used and disclosed by businesses. Businesses must ensure that they comply with the relevant provisions of this Act or they may face significant penalties.

Other legal factors that businesses need to be aware of include: tax laws, intellectual property laws, environmental laws and workplace health and safety laws.

Businesses operating in Australia need to ensure that they are aware of all the legal factors that may impact their business. Failure to comply with the relevant laws can result in significant penalties.

Environmental factors: The environmental environment in Australia is generally favourable to businesses. The country has a strong commitment to environmental protection and its citizens have high levels of environmental awareness. However, the country is susceptible to natural disasters such as bushfires and floods and this might have an indirect impact on Starbucks’ business in the country.

There are many environmental factors that can affect the health and wellbeing of people living in Australia. Some of these include air pollution, water pollution, exposure to hazardous substances, and climate change.

Air pollution is a major problem in Australia, particularly in urban areas. Air pollutants can come from a variety of sources, including cars, factories, and power plants. These pollutants can cause a range of health problems, including respiratory infections, asthma, and cancer.

Water pollution is also a major problem in Australia. Pollutants can enter waterways through sewage systems, agricultural run-off, and industrial effluent. These pollutants can cause gastrointestinal illness, skin infections, and neurological damage.

Climate change is also a major environmental issue facing Australia. Climate change can cause more extreme weather conditions, such as heatwaves, bushfires, and floods. These conditions can lead to health problems, including heat exhaustion, dehydration, and respiratory illnesses.

There are many things that people can do to protect themselves from the harmful effects of environmental factors. Some of these include staying indoors on days when air pollution is high, drinking clean water, and avoiding exposure to hazardous substances.

PESTEL analysis is a useful tool for understanding the macro-environmental factors that might affect your business in the long run. In this article, we have carried out a PESTEL analysis of Starbucks in Australia. We hope that this will provide you with some insights into the potential opportunities and challenges that Starbucks might face in the Australian market.

What are the advantages of hiring a digital advertising agency?