This is going to be a night time mission so be ready to look at the pretty lights of Manhattan. Yuri’s message explains that a silent alarm was tripped at Wilson Fisk’s estate sale. It is strange to think that someone has the gal to steal from Fisk but then he is in Jail so there is a possibility that other players in town would like to mark the territory that once belonged to the Kingpin. There is the other possibility that his cronies or his partners are behind the whole thing, only an investigation can give you answers so let’s get there and find out what’s what.

You have to swing your way all the way to the auction house at the Upper West Side. Make sure you explore the area around the marked spot. Scout out the surrounded surveillance towers to make sure they are sorted so all places are exposed on the map. Make sure you get this done before moving to the target area. 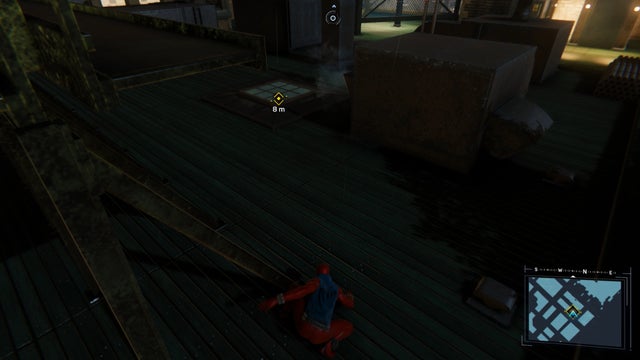 Yuri’s message will explain how you should be moving in quietly so the mission parameters will dictate that you should be stealthy. Find an opening outside to get into the building. Get on the roof top and find a window to gain entry. Move around and investigate the area. You will come across a strange looking mask-wearing man with weapon and a singular hostage. If you make a noise then chances are that the civilian will be killed so make sure that you don’t. Stealth means everything and you must find a way to take care of the gunman. Try to open the suits option and craft the ‘Long Range Scanner’ and ‘Silent Step’ suit modes. These two modes can make this mission a lot easier for you unless you believe in your abilities to get it done as is.

Use R3 to sense the enemies around your location and you will find – 5 in the main room with a hostage below you, 2 on the left and 2 more in different rooms on the right. All you have to do is hold the urge some kick some ass simply keep heading straight and then take a right. Here you will find a vent to slip into one of the secondary rooms. 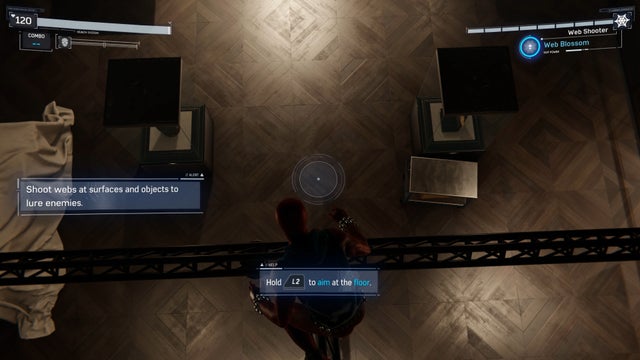 Here you will find only one enemy but you must beware for if he spots you, he will call for help and the hostages might lose their lives so instead of taking the chance, move yourself to the light fixture and aim a web shot down at the ground below you. This will get the enemy’s attention but he won’t call out for help. He will approach the spot to see what’s going on and you simply press Square when he is in range to perform a nice take-down and web him up good. 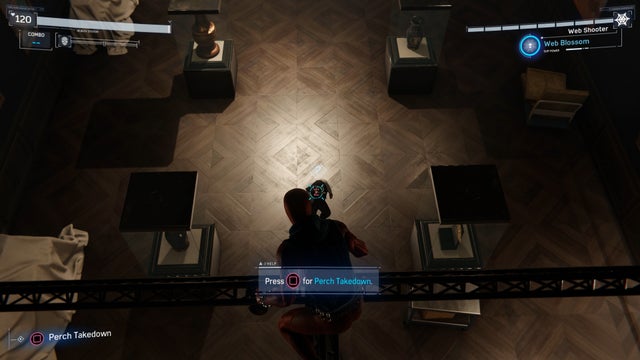 Another enemy is in the room right next to this one but do not approach straight away, return to the rafters and find a vent on the side of the wall above the door. Enter the vent to get above your next target. Once you are in position, do the same thing by pressing square when he is in range and web him up good after performing a take-down. 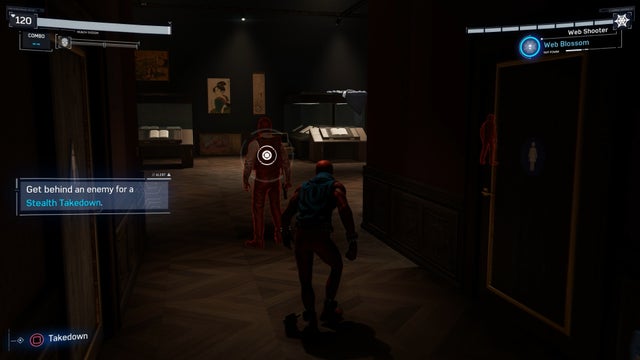 Drop into the room and be careful of the third gunman. He is not far from where you have just webbed a guy, best way to tackle him is by getting behind him and wait for the right moment and perform a stealth take-down. Don’t worry, its not a sucker punch if the guy is evil. 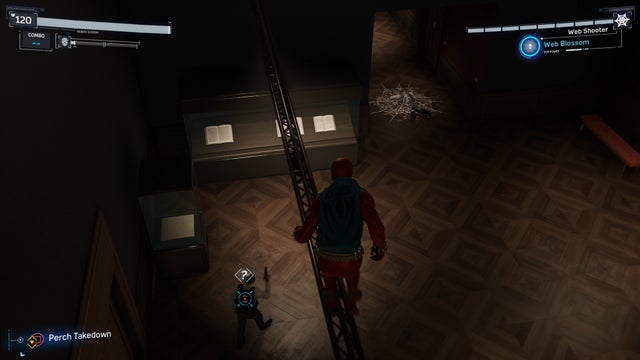 Now its time to move into the next room, perform a ping by pressing R3 to spot more bad guys. Get up somewhere so you won’t be spotted and locate another vent and climb into it. Keep moving till you get to the next room and this is where you will listen to a conversation between two masked guys. 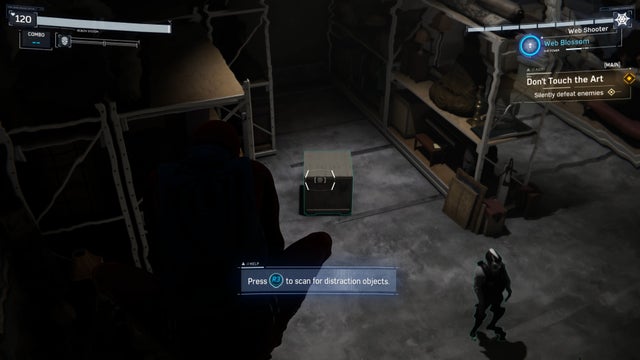 You must perform a ping here before doing anything and you will find that they have the “Danger” icon above them which means that even if you take them out, it will alert others nearby. Best to confuse them and take advantage of a distraction. This is where the nearby crate will play well, hit a web shot on it and as one of them inspects the box, zip up the one who stays behind while the other investigates the anomaly. 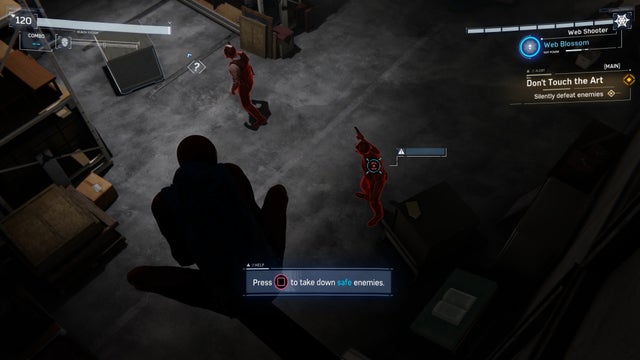 Once one of them is out of commission, perform a zip a take-down by using triangle on the other one to take out the room. As you roam and scan this room, you will come across a Spider-Man strap on a camera, which will surprise you but more on that a bit later.

This is where a little flashback will happen. 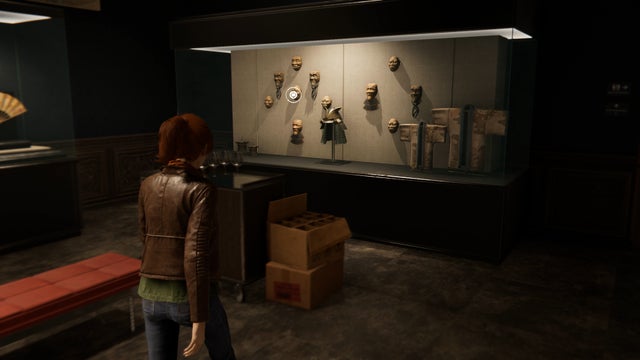 You are not Peter this time around but someone else. You are at the Estate Sale and you will happen to be a girl this time around. Once you gain control of the character, move around and inspect the art collection. You will find Theater Masks on the left, A Japanese Tatami Armor on the other side of the glass to the left and ahead a Katana and Sengoku Samurai in the centered display. Left from the center display are some Hand Rolled Cigars from Sykaria as well as more Tatami Armor. 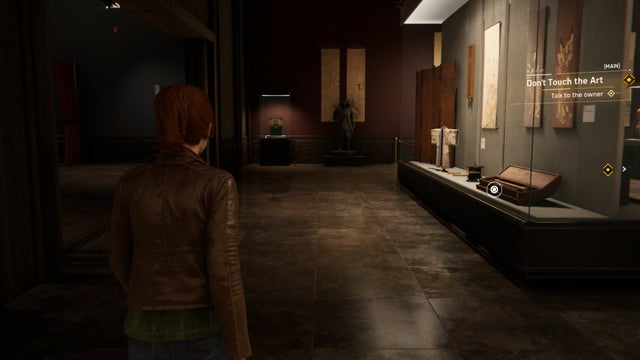 Next room, you will spot a large tapestry of Japanese origins and a landscape on the right wall. You can spot Fisk’s jeweled cane behind the display near the curator. You can move to the back room where the auction floor is and up on the stage you will be able to spot a vase, bonsho bell and podium. 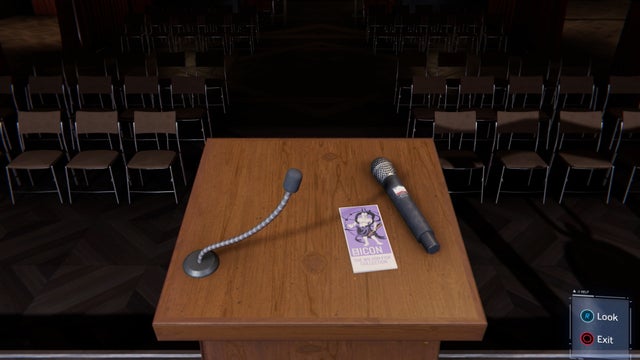 One you have your fill of the art and pieces from the history, you should go back and speak with the curator. She will entice you by showing some art pieces so you’d take some pictures as she explains the piece in detail to make it sound more interesting. Inspect the piece in the case and take a picture of it. Once the curator moves on, take as many pictures as you want and follow her as you do. Look for the photo prompt and when it happens, simply hold L2 and press R1 to take a snap. 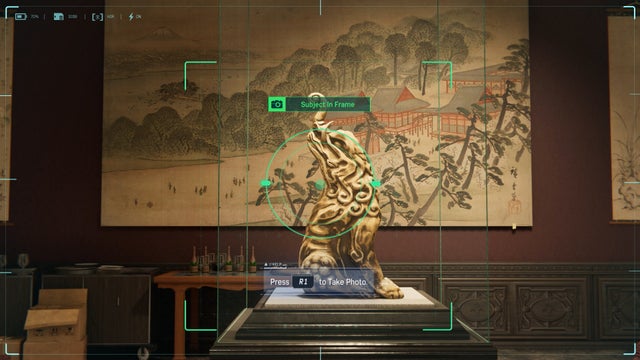 The curator will receive a phone call and she will move into a room with room ajar and this is where you shall notice a statue sitting an odd spot. Snap a picture of it before the curator makes it back. 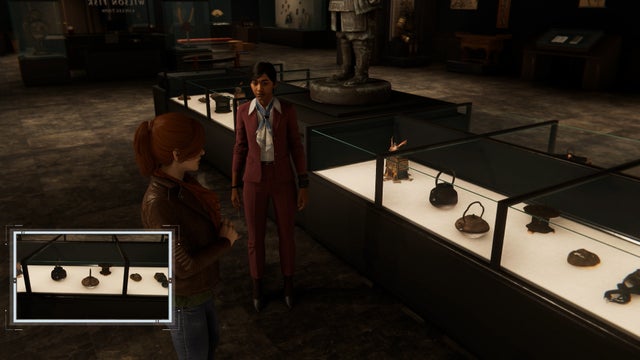 Follow the curator but do not let her spot you. Be sneaky about it, hold your spot when you need to and sprint when you think you can. You will find the opening when the curator looks towards the door, this is when you can sneak along behind the displays past her. 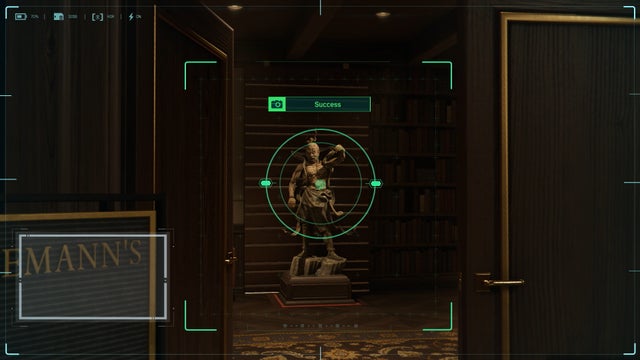 Double back to the champagne table and time your approach when the curator is not looking or her back is towards you. Get as close as possible to the door she is guarding. Once you are close enough, all you have to do is time it when she is not looking and get through the door. 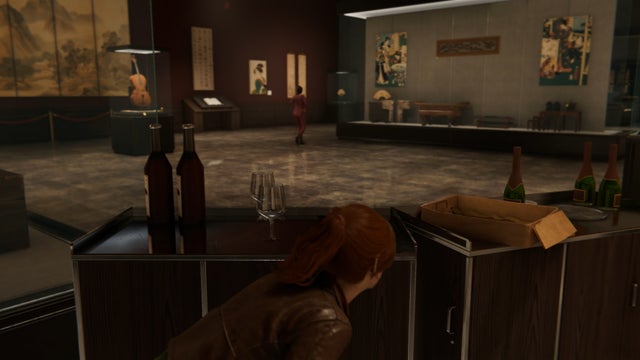 Seems like the statue in question holds something secretive about it. You must look around the office where you are to find a way to open the statue by collecting clues. You may not be the Spider-Man right now but you can still use R3 to highlight items and objects. 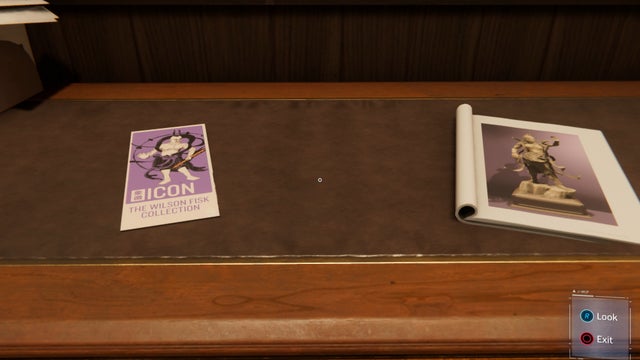 There’s a desk on your left, it has a pamphlet of the statue on top of it. You need to inspect that by pressing X and you will find out that this statue is holding an object. There are some interesting words written on the picture next to the pamphlet. It reveals that the statue can be posed, and its most common is mouth closed, right arm down, left arm palm up. 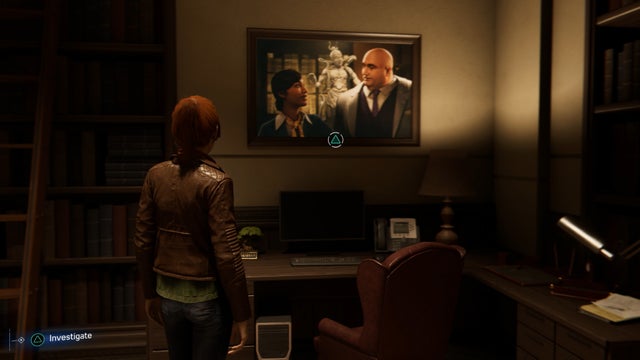 Also check out the portrait of the curator and Fisk on the opposite wall. Here you will spot the arms have changed now, its right arm is half raised, palm up and left arm is down. 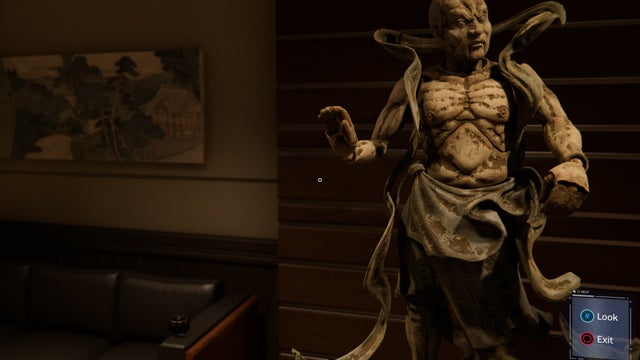 Approach the statue now so you can interact with the arms and head. Close the mouth first and then lower the arm on your right. Raise the other arm slightly and raise its palm as well now, move the head so that it faces your right. This is going to unlock its left arm but there is something missing still. 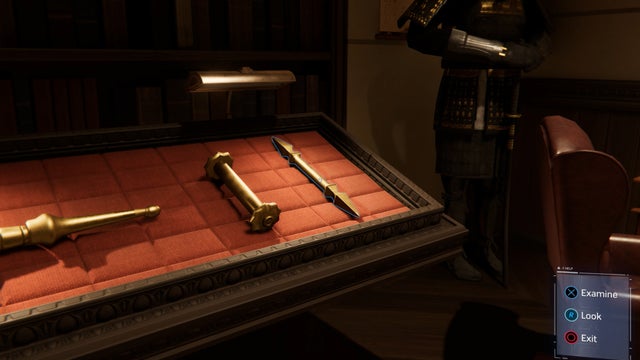 Move to the display items and you will find which weapon the statue is missing. It happens to be the dual spear which you will find on the far right. Get that and place it in statue’s hand and boom, you will obtain the secret that the statue has been holding within. Turns out to be some files. 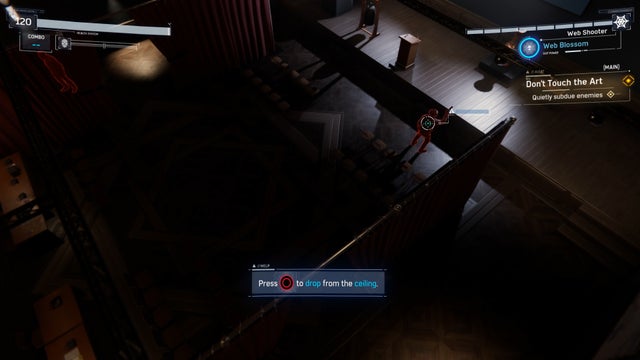 You are back as Spider-Man and you know now, what went down here before you arrived. You must stick to ceilings and crawl through the open sections back into the main rooms where the hostage is being led away. 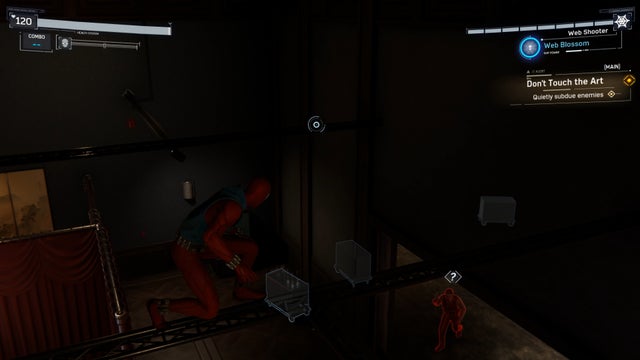 There are still plenty of masked gunmen around so throwing caution to the wind is still not on the table so stick to the shadows and quieter steps. As the hostage goes out of the room, you will find there are still two left in the auction room while another pair is on guard detail to protect the door to the rest of the collection. Separate the two guards in the auction room by simply waiting on them or create a distraction, it’s up to you. Use the perch take-downs here and you will thank me later. 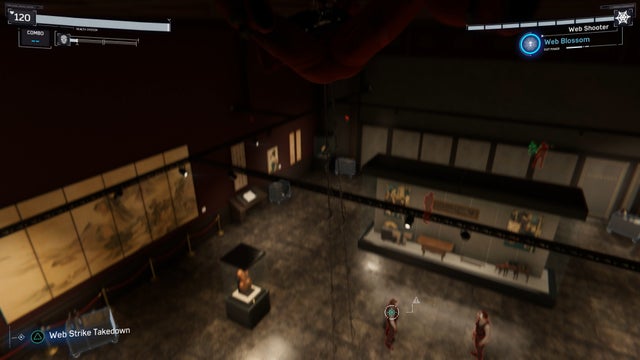 Once all gunmen are taken out, head to the first display area and take out the two masked men talking to each other. Don’t forget to use R3 to know there is another one far behind the display. Ones’ with the hostage have closed the room off which makes it easier for you to distract them and take out the two in the middle. 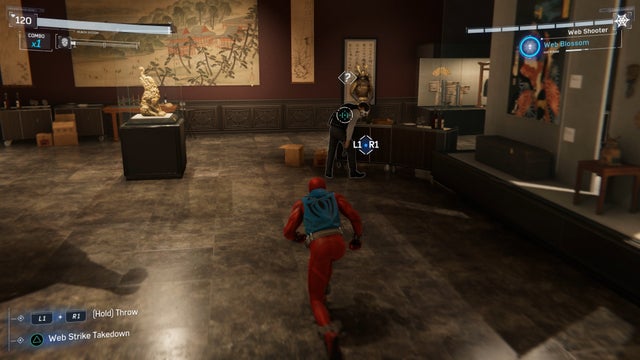 Use the pinging method and separate the two and take out the one left behind and sneak up on behind the other one. This leaves only one more guy and he is on his own and fairly easy to take down. 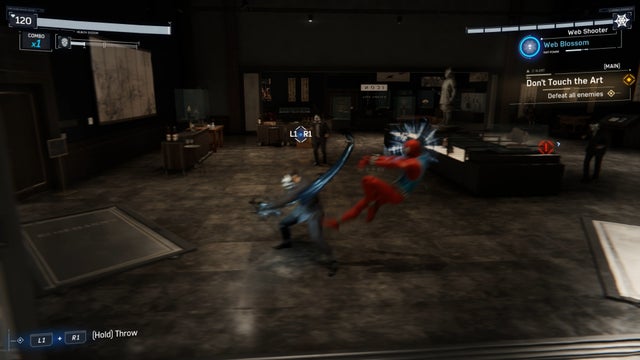 Something will happen here as your friend, the girl, her cover will be blown and you will have to end up fighting some guys hand to hand. However, these guys harness some weird energy which will cause increased damage but they will get hurt when you attack them. Here use, the best option is to use the upper cut and knock them in the air and take them out while they suspend. 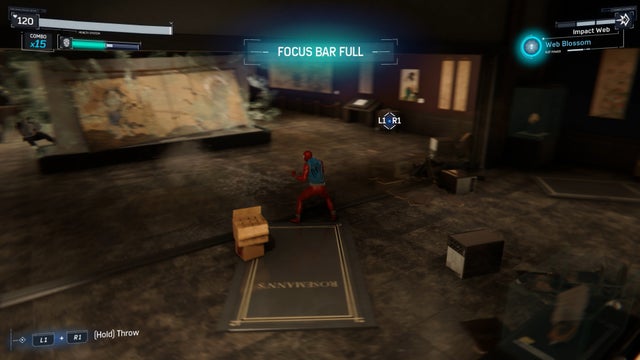 Use webbing and take down the enemies with guns and don’t forget to evade their attacks. 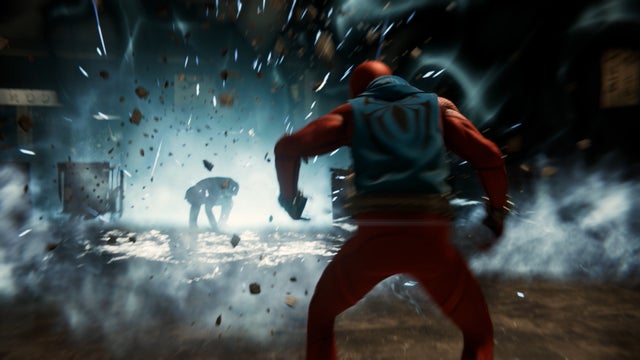 Second wave after you take these guys out will also have weapons so don’t ease up and keep at your full alert. The weapons they will wield this time will be quite powerful and these weapons will create some sort of shock-wave that will hit you even at a distance. Zip attacks won’t work on these guys so your best choice is to get up close and upper cut them. Keep our suit power in mind as this place will hit you as a surprise. 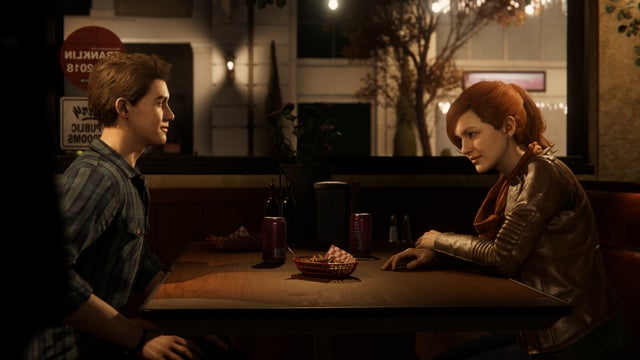 For Spider-Man, the mystery won’t solve here but you will have something interesting waiting later.

Apex Legends Guide: How you can Master the Pathfinder hero