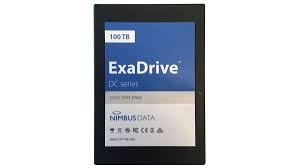 Nimbus Data has suggested that a world-record-breaking 200TB solid state drive might be released before the end of the year, according to the firm.

According to him, “we are working on a successor to the 100 TB SSD that will have even more capacity, performance, and energy efficiency than the ground-breaking 100 TB SSD, and we anticipate to deploy this next-generation SSD in 2022.”

As for whether the drive would be a 3.5-inch model, similar to the 100TB ExaDrive DC, if it will be available with a SATA or SAS interface, whether it will be built on TLC or QLC NAND, and what the pricing and precise capacity will be, Isakovich was mum on the subject.

Isakovich stated that 200 terabytes (TB) was the magic figure in a 2020 interview. Covid subsequently took hold and disrupted supply chains like never before, with a projected delivery date of 2021 for a solid state drive of that capacity.

The plans for a larger-than-100TB hard disc are back on track now that things are returning to normal. 200TB is 10 times larger than the biggest hard disc drive currently in use, making it an ideal storage solution (e.g. Seagate Exos 20TB and Seagate IronWolf Pro 20TB). Because the Exadrive DC is designed to replace current hard disc drives in data centres, a 3.5-inch form factor and a SATA/SAS interface are logical choices for the device.

On NAND dies in 2018, 256Gbit of data may be stored on them. But 1024Gbit ones are now available which, in theory, would allow for 400TB SSD to be rolled out. Due to supply and demand, 512GB NAND is no longer cutting edge and is expected to be less expensive. There is also a new controller from Microchip, the Flashtec NVMe 4006, which will allow for drives with record-breaking speed and capacity.

When it comes to replacing whole banks of 3.5-inch hard disc drives with a 200TB SSD, the biggest uncertainty will be how much the price will be. With no other 100TB drives on the market and a current MSRP of $40,000, will Nimbus Data raise the price of its new flagship to $80,000 given these factors? I don’t know yet.