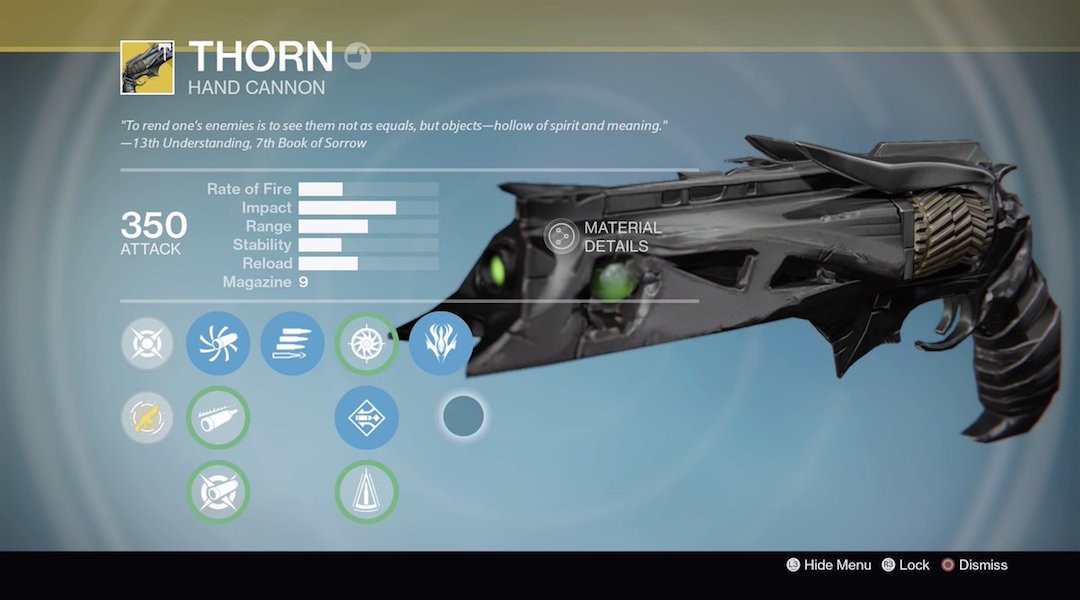 With Destiny 2 new DLC: Season of the Drifter, the game has received many exotics. Thorn Hand Cannon is not exactly new to the Destiny series as it was also available in the first edition of the game. But for Destiny 2, it has been introduced with Season of the Drifter. Players who have played the first game of the series know that Thorn Hand Cannon was a pure evil weapon which was considered overpower in the game. As a matter of fact, its addition to the new game has been welcomed by mixed reactions. Players are excited as well worried to have such a powerful killing weaponry in the arsenal. Thorn Hand Cannon will be available after 12 March and the steps have already been leaked to acquire it. This article will guide you on how you can get this weapon of destruction.

As the gun is not available in the game yet, no one has obtained it. But the process leaked is pretty much official and it will guide you through the whole way. We presume that the Drifter will be the one to send you on a mission called A melted Hunk of Metal, which will ultimately reward you with the weapon you are looking for.

A Melted Hunk of Metal:

Irrespective of the fire damage, you can still spot this gun as a Thorn, a mythical weapon that can wreak havoc on the Guardians from light. Shadows of Yar have been known to carry Thorns. They have been to follow the infamous Guardian killer. The gun you are going to find in the game will be in broken state. But it can be fixed of course. For that, you have to take the weapon to the famous gunsmith Banshee-44 in the Tower. Taking the gun to Banshee-44 will activate a quest called The Essence. Following are some details on how you can complete this quest.

The gunsmith will recommend you few items to collect before restoring the weapon to its original shape and form to make it working again. Firstly, you’ll be looking for Hadronic Essence. It is a thick lattice like item of exotic baryons and mesons. Hadronic Essence was favored by Warlock in fieldweave. You can collect it by completing side missions for Asher Mir. Usually, these side missions will require you to kill some Warlocks in the Crucible. Hadronic Essence could also be obtained by completing Nightfall strikes. After getting the item, players will be required to harvest it. Harvesting Hadronic will yield you the final product.

After getting The Essence, you next mission is to complete The Steel. In this mission, you’ll be required to get Plasteel Plating. This can be acquired by completing bounties for Sloane on Titan. These missions are not very difficult. Players have to kill some Titans in the Crucible. Just like The Essence, there is another way to attain some Plasteel Plating and that is through completing Blind well. Try to get all of these, as the last one will yield the best result and will help you earning the Heroic version.

“Last on the list of Guardian-grade components is Sapphire Wire, another hard-to-come-by item formerly favored by Hunters because of its versatility. Sapphire Wire, like Plasteel Plating, was another casualty of the Red War… but you feel confident that you can scrounge some up. Gather Sapphire Wire by completing bounties for Ana Bray on Mars, by defeating Hunters in the Crucible, or by completing an Escalation Protocol wave. Escalation Protocol waves grant the most efficient progress.”

Now that you posses all the required components, your next step is to forge the weapon. But this is not it. There are some steps left to be followed before you can equip the ‘Thorn”. Read the following details carefully as you’ll need to follow them exact as written here. Go to Crucible and kill enemies by using Void Energy and Hand Cannons. This will charge up the weapon. If you find it difficult to charge the weapon, a fast way to do that is to land Precision Streaks with Void Hand Cannons. In competitive matches, it is extremely helpful.

“The Weaponize the Unknown quest step for Thorn is eerily similar to the original quest. Players will need to go into Crucible and use Void energy or Hand Cannons to kill other players. However, it seems as if progress is not lost on deaths. Furthermore, using a Void Hand Cannon in Iron Banner or Competitive Crucible will make this go a lot faster.”

“Your Thorn hums with the hungry indifference of the Void, but it lacks something essential. You know the original Thorn was intimately connected to the Hive, though you don’t know exactly how. Wandering around the Tower to ask your mentors about the provenance of a banned weapon strikes you as a bad idea, but— There are quieter places to ask questions. Places off the beaten path, where knowledgeable Cryptarchs have settled down to do their work in peace and quiet… Pay a visit to Tyra Karn at the Farm. The Farm is accessible via the EDZ Director.”

At this step, you are fairly close to completing this tiresome mission. We can understand that finding Thorn will be difficult and somewhat boring but the reward will make it worthwhile for sure. For final step, you have to meet Tyra Karn at the Farm in EDZ. She will give you the last quest called The Chasm of Screams.

“While you were speaking to Tyra, she mentioned something called the Hated Path, a sort of primer to transform an ordinary Hand Cannon into a Thorn. Bathe your Light in horrors. Feed your weapon with death. Bind it with sickness. Horrors, death, sickness… that all sounds like the Hive nests on Titan to you. Defeat the Arbiters, Sardav and Telesh, then defeat Savathûn’s Song in an epic reprise of strike “Savathûn’s Song” on Titan.”

To complete the final quest for Thorn Hand Cannon, players must defeat higher level enemies called Hive. This will possibly be the boss fight and after completing it you’ll get hands on the weapon of destruction.

This is the detailed guide on how you can reforge the lethal gun. If you get stuck anywhere or don’t understand anything in the guide, feel free to ask us in the comments section below. Again, as the weapon is not been live in the game yet, so there is no confirmed news that this method is true or not. But it is the best came to our knowledge so far. Let’s wait and see whether this will work or not. If you do get the weapon through this or any other message, help your fellow gamers by sharing the method with us in comments.

Destiny 2 Guide: Where to Find Xur