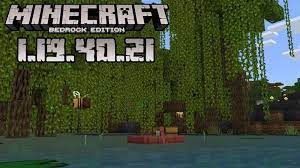 On September 14, 2022, the most recent beta or preview version of Minecraft Bedrock Edition was made available by Mojang. The version available for Windows, iOS, iPadOS, and Xbox is referred to as Preview 1.19.40.21, whilst the version available for Android goes by the name Beta 1.19.40.21. After the release of Beta 1.19.40.20 or Preview 1.19.40.20, which kicked off testing for the Bedrock 1.19.40 version of the game, this update has been released just a few days later.

It would appear that some bugs are still there, despite the fact that update 1.19.40.20 has fixed a significant number of them. This update, version 1.19.40.21, includes several problem fixes and several new improvements to the command format. These bug repairs and enhancements pertain to aspects such as spectator mode, vanilla parity, user interface, mobs, and blocks.

Read Also: How to Get Moss in Minecraft

1) Navigate to the Xbox store or Minecraft Launcher You can download the most recent beta or preview version of the game from the Xbox application if you are playing the game on both Windows and Xbox. Enter “Xbox” into the search bar of your system, and then navigate to the appropriate location. The Xbox application will launch when you do this. Utilizing the game’s Launcher is yet another fantastic option for downloading the sample version on a personal computer.

Playing on iOS devices, on the other hand, will necessitate your participation in a preview using the application known as TestFlight. Go to the Google Play Store if you are using a device that operates on the Android operating system.

2) Search for the beta/preview version After opening the Xbox application, go to the search bar and input “Minecraft Preview.” There will be a large number of search results connected to the game that surface (with terms that are comparable). You will need to choose the “Minecraft Preview for Windows” option.

You also have the option of going to the Launcher and selecting the “Preview” tab there. On an Android device, you can accomplish this by using the Google Play Store, and on an iOS device, you can use the TestFlight programme. Users of Xbox and personal computers must complete this step. The process is considered to have been finished in the step before this one for users of Android and iOS.

Simply clicking the “Update” button once you have navigated to the preview or beta page within the Xbox shop will cause the most recent beta version to begin downloading onto your device. After finishing the prior step, you will need to return to the Launcher and hit the “Install” button there. After the beta or preview version has been successfully downloaded, open the game of your choice and click the “Play” button, regardless of whether you are using the Launcher, the Xbox application, or the Microsoft Store. After that, you will be able to play the most recent beta version of the game.

Note: Please keep in mind that beta or preview versions may contain unanticipated experimental features, which may cause them to be unstable. You are strongly encouraged to report any problems you come across to Mojang so that they can continue to improve the game.

The Bedrock Edition of Minecraft is one of the game’s many iterations that is played the most. It is available for download on practically all of the main gaming platforms, including Microsoft Windows, PlayStation 4 and 5, Xbox One, Nintendo Switch, Android, and iOS.

The Minecraft Bedrock beta versions for Windows now have their own own standalone programme called Minecraft Preview. This application is available for free to anyone who owns Minecraft or subscribes to Xbox Game Pass.

Are allay in bedrock?

Both the allay and allay spawn egg identifiers have been added to the game and are mentioned in the Bedrock Beta Addons Documentation.

Is Warden in bedrock?

As is customary, gamers are interested in gaining additional knowledge on the new features introduced by the update, particularly those pertaining to the Warden. The Warden is now available to players in Minecraft at long last. Because this was included in the most recent release, it may now be obtained in Bedrock and Java.