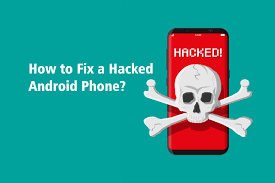 A hacked phone is awful news, therefore if you suspect that someone has hacked your phone, you should act quickly to resolve the situation. This article discusses how to restore the harm (to the greatest extent feasible) and return to normal life.

How Do I Know If Phone Has Been Hacked

The following are signs that someone has hacked your phone: your phone losing power rapidly, running slowly, weird behavior such as pop-up windows or unexpected applications appearing, and unidentified calls or messages appearing in your phone’s log.

Causes of a Hacked Phone

There are a variety of reasons why your phone may be hacked, and not all of them are totally within your control.

Regardless matter how hackers were able to infiltrate your phone and install malware or a virus, the effects are almost always the same. The hacker will seek to make use of any information contained on your phone in order to make a monetary gain.

They can look through your phone’s data for personal or sensitive information, such as bank account details, social security numbers, or online account passwords, and then steal that information.

How to Fix a Hacked Android Phone

It is possible that simply restarting your smartphone would resolve all of your Android troubles. Sometimes the problems we believe we are experiencing with our Android smartphone are really mental constructs. So, before diving into the technical aspects of the problem, try this simple solution for fixing a hacked Android phone first.

It is possible that this approach will work if the hacker has just targeted your device for a brief period of time. When your Android phone has been seriously compromised, or if the hacker has attempted to compromise your phone on several occasions, this technique will not be effective for you.

Some of the symptoms that your Android smartphone has been hacked include the appearance of pop-up advertisements on your device’s screen and decreased phone performance, among other things. However, similar symptoms might also occur as a result of insufficient storage space on your smartphone, the presence of unneeded data, and the presence of programmes loaded on your phone.

If you find yourself in this circumstance, you may try clearing the cache on your Android phone to see if that helps to resolve the problem. To delete your phone’s cache without losing any data, you can follow the procedures listed below.

1.You should turn off your phone.
2.Once the smartphone has been turned off, hold down the Volume Up and Power off buttons on the phone for a lengthy period of time until the Android logo appears on the screen.
3.After entering the Recovery mode, pick the option to erase the cache partition from the drop-down menu that appears. You can move between the options by pressing the Volume Up and Down keys on your keyboard, and you may pick an option by pressing the Power button.

Another effective method of repairing a hacked Android phone is to do an antivirus check. The installation of powerful antivirus or antimalware software on your Android smartphone is a need.

An antivirus programme is essential for every smartphone since it not only prevents virus-infected files from entering the device, but it also eliminates infections that have already entered the device.

If a hacker discovers an app on your phone that you haven’t installed, or if your phone is running an old app that was downloaded from the Google Play Store, or if you have an app installed on your phone that is no longer supported by the developer, all of these factors create an opportunity for the hacker to infiltrate your device with malware or adware.

As a result, in this situation, the first step you must take in order to repair a hacked Android phone is to uninstall any unneeded or suspicious applications from your phone.

What happens if Android phone is hacked?

When it comes to old phones, the battery issue is typical, but when it comes to new Android devices, it might suggest a number of other problems. It is not uncommon for a hacked phone to begin experiencing regular battery drain. Investigate whether your phone is running an unidentified programme which is draining its battery power.

How To Make A Hopper In Minecraft