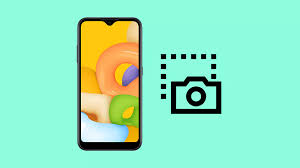 It is astonishing how frequently you find yourself in need of taking a screenshot on your phone. Knowing how to take screenshots is essential, whether it’s for the purpose of capturing a post on social media, the screen that appears after you win a game, or just a humorous joke. The touchscreen, the buttons on the side, and even the S Pen can all be used to capture screenshots on a Samsung Galaxy phone or tablet. Fortunately, Samsung has included a variety of ways to do this.

This guide will walk you through the process of taking screenshots on any Samsung Galaxy device, including the Galaxy S, Galaxy Note, and even the Galaxy Flip.

How to Take a Screenshot on a Samsung Galaxy using Buttons

Using the power button and the volume down button together is the quickest and easiest way to capture a screenshot, and it’s a method that’s common to almost all recent Android phones.

1. Adjust the display so that it appears how you want it to be captured.

2. While holding down the Volume Down button and the Power button at the same time, take a screenshot by pressing and releasing both buttons simultaneously. You’ll notice the screen flashing and then gradually getting smaller. 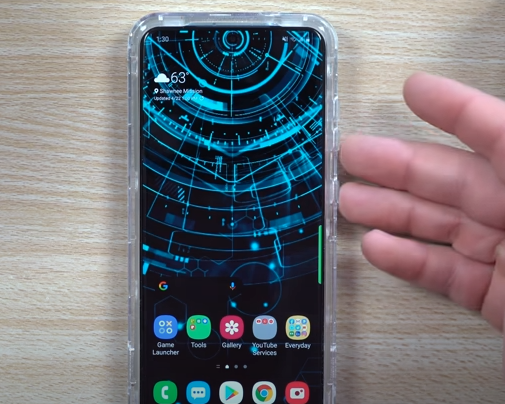 3. The tools for taking screenshots trip will temporarily appear in the bottom-right hand corner of the screen. You have the ability to alter the image using the tools provided here; however, if you simply wait a few moments, the screenshot will slide off-screen and be saved in the photographs app on your device.

The slightly curved panels used on Samsung Galaxy phones have become rather popular. This specialized screen gives you the ability to carry out routine tasks with only hand gestures; for instance, you can take screenshots.

This feature, which is known as “Palm Swipe,” ought to have its default setting set to “on.” You can verify this, though, by going into the Settings app:

1. Launch the Settings app, then select Advanced features from the menu. 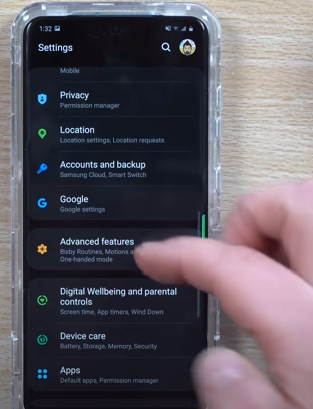 2. Navigate to Motions and gestures, then after that check to see if the “Palm swipe to capture” switch is turned on. 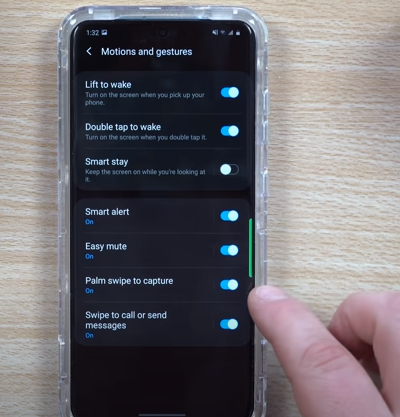 You can use the underside of your hand to take a screenshot once the option has been enabled.

1. Bring up the screen that contains the content you wish to capture in a screenshot.

2. Position the edge of your palm on the edge of the screen of the smartphone, with your pinky pointing down the length of the phone.

3. Make a single, fluid motion with your palm as you move it across the phone. You are free to proceed either from right to left or from left to right while carrying out this action.

The screen will quickly flash and then shrink, which is a visual indication that the screenshot was taken successfully.

Why can’t I screenshot on my Samsung?

The inability to take screenshots on an Android device is frequently caused by a lack of available storage space. Additionally, there are people who receive the error message “Cannot take screenshot due to restricted storage capacity.” Navigate to Settings > Storage or Settings > General Management > Storage to inspect your available storage space.

Where is Samsung capture app?

You may acquire the most recent version of Screen Capture by shopping at the Galaxy Store. Utilizing this link, you will be able to download it onto any Samsung device. On mobile devices manufactured by other companies, this function will not be available. The Screen Recording feature can be activated from the Quick Settings menu on a Samsung smartphone.

What happened to my screenshot button?

On Android 10, the button to take a screenshot was located at the very bottom of the power menu; however, it is not present on Android 11. With the release of Android 11, Google relocated it to the Recents multitasking screen, where it can now be found just below the screen to which it corresponds.

Where do you find screenshots on Android?

On the majority of Android smartphones, you can view all of your screenshots by opening the Photos app, selecting the Library tab, and then selecting the Screenshots folder.

Does Samsung have capture?

On our Samsung Galaxy, you need to press both buttons simultaneously for only a moment. After that, the illustrative Smart capture menu appears at the bottom of the screen on the Samsung Android smartphone you are using. This provides you with additional options for your screenshot, including the ability to capture the scroll.

Why isn’t my phone letting me screenshot?

If you see the error messages “Storage may be in use” or “Cannot snap screenshot due to insufficient storage space,” reset the device. To make more room on your device, open the Android storage manager. If that doesn’t help, try one of the finest cleaners for Android phones to clear out garbage files, or migrate your stuff to either cloud storage or an SD card.

How to Change Your Discord Background

How to Restart a Windows Computer