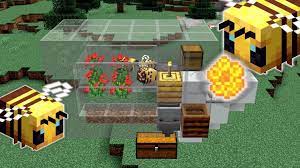 The announcement made by Mojang that bees would be added to Minecraft caused the community of players to go into a frenzy. Who could blame them? Have you seen how adorable these creatures are? However, much like in the real world, when a new creature or item is added to Minecraft, it immediately begins to have an impact on the rest of the game. The new Honeycomb item also appeared simultaneously with the bees. Candles, Waxed Copper, and even additional Beehives can be crafted with honeycomb, which can be used in the process.

To put it another way, as soon as you have a sufficient quantity of honeycomb, you can launch your very own honeycomb farm that can support itself. Beekeeping, but without the cumbersome and restrictive white protective jackets.

Read Also: How to Use Enchanted Books in Minecraft

How to Use Honeycomb in Minecraft

There are several variations of craft projects that call for honeycomb in various capacities.

To begin, you can construct a Beehive out of your Honeycomb by using it. The functionality of Beehives is identical to that of Bee Nests; however, you are free to position Beehives anywhere you like. In order to make a Beehive, load up your Crafting Table with planks in the top and bottom rows, and honeycomb in the middle row.

After that, you can begin to manufacture Candles. When set on the ground, candles can be used as a source of light; however, you need require Flint and Steel in order to light them. To make a Candle, you need to do nothing more complicated than lay one piece of String over one piece of Honeycomb.

You will have created a Honeycomb Block by arranging four honeycomb pieces in the shape of a square on your craft table in whatever location you like. This honeycomb-patterned block is strictly for cosmetic purposes and has no functional purpose.

Last but not least, you can create waxed copper by mixing a single piece of honeycomb with any copper-based material. If you wax your copper things, you may prevent them from oxidising, which will allow them to maintain their authentic colour.

Can you get honey from honeycomb in Minecraft?

In Minecraft, you can collect honey from beehives as they get full. Honey can be easily gathered in Minecraft with little effort. The honeycomb that is contained within a bee nest can also be extracted and used. In Minecraft, honey may be gathered by placing an empty bottle on top of a full bee nest or hive and shaking the bottle.

Why are my bees not making honey Minecraft?

Simply fill an empty bottle with a full bee nest or bee hive and shake it up to collect honey. Before honey can be harvested, there must be a total of five distinct deposits of pollen made by bees.

What is the difference between a beehive and a bee nest Minecraft?

The primary distinction between a Bee Nest and a Beehive is that the former is generated by nature during the process of world formation, whereas the latter is created by the player using various crafting recipes. Bee Nests have a more recognisable striped pattern, whereas Beehives have a somewhat more brick-like feel to them. Both of these features contribute to their distinct visual appearances.

Will bees move into an empty hive?

You can bring bees to an empty hive, but it will take some time and work on your part. For instance, including wax frames in the hive might serve as a “bait” to attract new bees, and a narrower entrance to the hive is ideal because it is simpler for new bees to guard.

Why did my bees leave the hive Minecraft?

Each nest has the capacity to house between two and three bees. Once a bee has discovered a nest, it will return there every night, regardless of whether or not it is raining. The length of time that bees remain in their nest is measured in game ticks, and if you don’t tell the time in ticks (why not! ), the length of time that they spend there is precisely two minutes.

How to Get Ancient Fruit in Stardew Valley

How to Use Fill Command in Minecraft