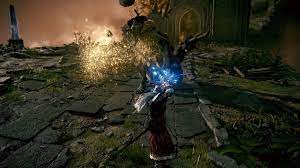 The term “magic” can refer to a wide variety of practices in Elden Ring, ranging from sorceries and incantations to pyromancies and dragon magic. The sheer number of options may seem overwhelming. The actual process of making use of the different forms is not overly complicated. You only need the spell, a spell slot, the appropriate stats, and either a staff or a seal in order to cast the spell. In this introductory tutorial to the magic of the Elden Ring, we’ll go further into each of these criteria so that you can begin casting spells to your heart’s content.

Read Also: Here is What Does Dexterity do in Elden Ring

How to Use Magic in Elden Ring

1: Have the Stats & a Casting Tool In order to even contemplate employing magic in Elden Ring, you need to ensure that your character has the appropriate statistics. Increasing your Intelligence is a prerequisite for using sorceries and the staves necessary to cast them; hence, you should put at least a few points into that attribute before you begin.

Incantations, which include all other forms of magic, make use of Sacred Seals and are primarily baked on the Faith stat. There are a few Incantations and Seals that require a secondary stat of either Intelligence or Arcane, but only a modest quantity of that stat. It is important to note that the values for the latter two conditions are almost always far lower than the primary statistic that is being utilised for magic.

2: Have the Spell in your Inventory & Equip It It should come as no surprise that you won’t be able to perform a spell if you don’t have the necessary components in your inventory to do so. When you have a spell in your possession, go to a Site of Grace and select the “Memorize Spell” option. After that, equip the spell in a slot that is currently open.

The vast bulk of Elden Ring’s spells, including the potent Comet Azure, are currently residing somewhere in the world of the Lands Between, where they are merely waiting to be found. A small selection of magical powers can also be acquired from a variety of NPC merchants located in the Roundtable Hold or elsewhere in the game world. These merchants include Rogier, Corhyn, and Sellen.

3: Have the Memory Slots There is no statistic in Elden Ring that dictates the maximum number of spells that can be equipped by magic users. Instead, you are tasked with retrieving Memory Stones from the several Rise buildings that are dispersed over the world. Some of these locations, such as Ranni’s Rise, which you will travel to as part of the Ranni’s questline, can be found in Liurnia of the Lakes, for instance.

If you find more Memory Stones, your total number of spell slots will rise by one. At this time, there are a minimum of ten Memory Stones and a significant number of other magic spells that can be equipped. Having the spell chosen in the top slot of your fast bar in the menu located on the bottom-left of your HUD while you are playing the game is all that is required of you if you have satisfied all of the requirements listed above. You can switch to a different spell, sorcery, or incantation by pressing the Up button on the D-Pad.

When you are ready to cast the spell that you desire, hold your casting tool in either hand and then hit the attack button that is associated with the hand that you are using. No matter what shape it takes, the magic is going to be cast. Keep in mind that you can “charge” certain spells to give them more power, or you can simply hit the button to cast the spell as quickly as possible.

That is everything you need to know to get started with magic in Elden Ring, so consider this guide to be complete.

Do you need a staff for magic in Elden Ring?

On the other hand, a wide variety of Elden Ring builds have the ability to make use of magic. You just need the appropriate people working for you. You need to have a staff in order to cast magic in this game; however, the size of some of the staffs is determined by other characteristics in addition to or in place of intellect.

Why is my magic not working in Elden Ring?

Your character’s attributes are to blame if some spells continue to be ineffective. Always make sure you’re paying attention to the values that the spells require. The Faith and Wisdom requirements for casting certain spells in Elden Ring are higher than those for casting other spells.

How do I use Incantations?

You can equip your incantations at any Site of Grace by going to the bottom of the page, where it says “Memorize Spells,” and picking the incantations you want to use. Because each incantation occupies a particular number of memory slots, you will need to find locations in the world with higher memory slots in order to cast more of these spells. These locations may typically be located atop Rises.

Where do I get the staff Elden Ring?

It may be discovered in Calid’s Street of Sages Ruins, which is located close to where the Sellia Crystal Tunnel begins. After arriving at this location, there will be a tall building with a room full with Scarlet Rot plants; once you have vanquished all of them, pick up the staff that is lying along the perimeter of the room.

How to Hunt Like a Pro in Red Dead Redemption 2