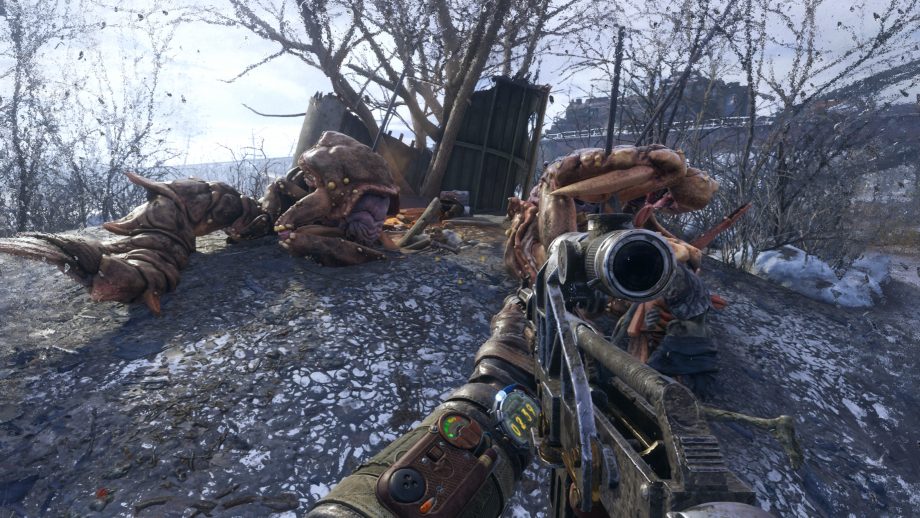 Not many players would have expected a return in Metro series after the bankruptcy of THQ. Still, the Exodus shines bright with a massive success. It has not only redeemed the series but also fulfilled the gaming lust of players who were craving for more of the post-apocalyptic series. Metro Exodus expands beautifully on the series previous games with amazing graphics and engaging storyline. Its huge success could be the first step towards the downfall of Fallout series. Let’s have a look on things that make Exodus a fine single player game in the era of multiplayer online especially battle royale mode games. Let us take Metro Exodus Review under consideration. Check out our guide for trophies in Metro Exodus

Metro Exodus continues the story of protagonist Artyom and Anna, trying hard to protect the remaining citizens of Moscow. In search of life, Artyom makes several attempts thorough his radio. But the dangers in Moscow soon convinces people to migrate from there. Artyom and his wife Ann lead a small group of people in search of a safe heaven. His aim for the journey was also to look for clues and uncover the truth behind nuclear war.

Storyline of Exodus has been the top priority of developers similar to previous games of the series. You get to see long cut scenes in the train and bunkers. Players might get the itch of skipping the cutscenes. Though, we suggest that you watch them to understand the full story.

One thing that we did not long for was the wait that you must bare while other comrades finish their conversations. Also, sometime during the game, characters can intrude or interrupt small talks.

As the storyline moves from Moscow in Metro Exodus, you get to see new factions in the game. Players who got bored with the same factions in previous two games will be happy to hear this news. As a matter of fact, star villain of Previous game: Red Army is just mentioned once or twice in this edition. You get to interact with new gangs. Most of them would like to kill you. With some luck, you can also encounter with some friendly group who’ll try to help you in your cause. Story is long yet engaging and it keeps you captivated until the end. We don’t want to give any spoilers but there are strong chances of a 4th edition in the series.

With the train journey started from Moscow, Exodus exhibits a diversified scenery through the game. From snow covered areas to vast deserts and thick forests, you get to enjoy the beautiful view all along. Interestingly, the game starts in Winter and ends around Autumn. Don’t worry, you also get to spend quite a lot of time in the bunker. So, the feeling of the original series won’t fade away.

Graphics are amazing in the game and environment is completely synchronized. Open areas look beautiful and shine bright. On the other hand, when you enter in buildings filled in darkness; you can feel a chill in the spine. Flashlight is your best companion through out the game especially in dark places where the horror can rise up to high levels. Metro Exodus is designed to provide life like experience to players, hence if you get lost’ feel free to use the map. Monitoring your movement on the map may keep you safe from the post-apocalyptic horror that awaits you in the dark places.

Still, Metro Exodus does not allow players to enjoy the open world experience. You can roam around to scavenge items and weapons though. But like any other open world game, you want many side quests to the main storyline. The game is designed to keep you on guard all the time as you continue your search for life. Monsters can appear out of nowhere with intensified combat. Never forget to have a spare gas mask in the inventory. In areas covered with radiation, your flask will be the only thing to keep you alive. Sneaking pass enemies will be a useful tool too as the game offer very little med-kits. To get a reward, you must kill the guarding enemies and that sound dangerous.

Most of your encounters with monsters won’t be easy and will test your combat skills. With limited bullets and equipment’s in your backpack, you must use the firearm in the absolute need of hour. We suggest that if you find yourself limited on resources, don’t make a direct approach through the front door. Try to sneak up on enemies from behind. Remember, if you can see an enemy in the game, he is not that dangerous probably. You should look out for the one who is waiting for you in the dark.

Have you completed Metro Exodus yet? Tell us about your experience in the comments section below. What tip would you like to give to other players?

Related Topics:Metro Exodus
Up Next

Top Racing Games for Every Kind of Gamer

How to position devices perfectly in Fortnite Creative Mode